As Melbourne’s Metro Tunnel begins to take shape across the city, innovative technology is needed to help the system run more trains, more often, in a safe and efficient way. Assisting the new infrastructure to support the increase of services is the installation of next-generation, high-capacity signalling (HCS) along the Cranbourne, Pakenham and Sunbury Lines, creating a more reliable public transport network.

The Metro Tunnel Project is currently under construction across Melbourne and will free up space in the city’s busy City Loop by taking Melbourne’s busiest train lines through a new tunnel, helping to run more trains to and from the suburbs.

The Rail Systems Alliance, a consortium made up of CPB Contractors, Alstom and Metro Trains Melbourne, is the ‘brains’ of the flagship public transport project and is responsible for delivering the HCS across the network. The installation of the HCS on Melbourne’s rail network makes it the first rollout of HCS and associated communications systems on an existing rail network anywhere in Australia. The new HCS will replace Melbourne’s existing ‘fixed block’ system, which currently utilises coloured signals to tell trains when it is safe to proceed. The new HCS technology works by monitoring and controlling both the speed and location of trains in real time, moving with the trains and allowing them to safely run closer together and more frequently.

The signalling system will optimise the operation of the 65 new high-capacity metro trains (HCMT), which are currently being built in Victoria. Thanks to the HCS’s advanced technology, trains will be able to run every two to three minutes, which the Rail Systems Alliance says is the first step to creating a ‘turn-up-and-go’ train network for Melbourne, similar to those in London, Hong Kong and Singapore.

Rail Projects Victoria, which is delivering the project on behalf of the Victorian Government, estimates that the larger modern trains will provide an extra 121,000 passenger capacity on the Cranbourne, Pakenham and Sunbury Lines during peak periods, which is an increase of 45 per cent more peak capacity.

Existing signals currently used along the Cranbourne, Pakenham and Sunbury Lines will also be updated so trains that use the HCS, as well as those that use conventional signalling, such as freight and regional services, can seamlessly operate on the same network. 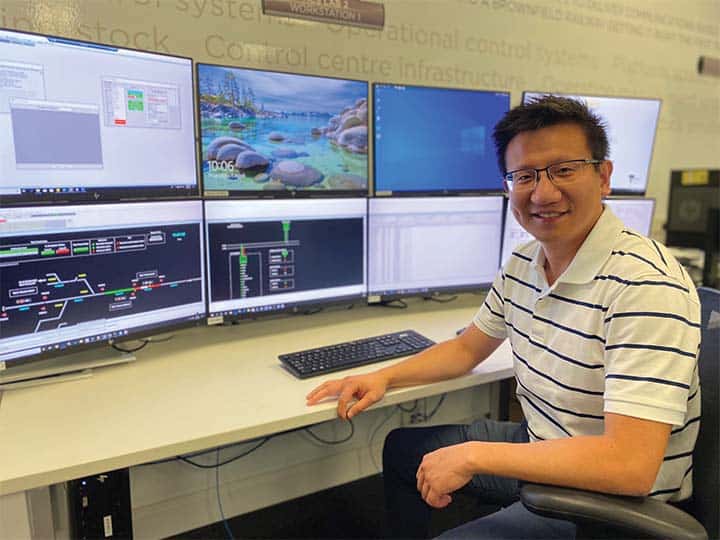 Dedicated control centres are currently being established in Dandenong and Sunshine to support the new HCS technology, with the centres to be staffed around the clock to monitor real-time operations. Network operators will be based at these high-tech signalling control centres to monitor their progress and ensure trains maintain safe stopping distances.

Trains on the network will wirelessly transmit real-time speed and location data to these control centres, allowing staff to track trains across the network. Prior to being rolled out across the entire network, the HCS has been trialled using a small number of X’Trapolis trains on the Mernda Line between Epping and South Morang stations.

The HCS was also successfully tested on HCMT trains at a dedicated 1.5km test track within the Pakenham East train depot, with first round testing taking place on 23 March 2021.

During this testing, the train was able to successfully communicate with trackside equipment, utilising the full extent of the HCS.

Simon MacMull, Rail Systems Alliance’s Integration Manager, said it was encouraging to reach this milestone and see lots of hard work pay off. “In preparation for this milestone, we have ensured all the basics on the train and wayside worked,” Mr MacMull said.

“It’s a really positive start to this testing campaign and it’s pleasing to see this early on how our integration efforts are paying off on-site, alongside all the efforts the team has put in to get these trains moving.”

In addition, the Rail Systems Alliance recently welcomed an innovative simulator that simulates the driver’s cabin of an X’Trapolis train, outfitted with HCS. The simulator technology is another crucial step in testing the new signalling system before it’s installed.

When completed, this change to signalling on Melbourne’s metropolitan network will signify the biggest signalling change for more than 100 years, marking a significant step in transforming the city’s transport network.

Helping to bring the new HCS technology to the Metro Tunnel Project are approximately 77 different kinds of engineers who will use their passion for maths, science and problem-solving to help provide positive outcomes for passengers across the network.

Automation engineer, Da Lu, said he was passionate about providing positive outcomes for Melburnians and couldn’t turn down the opportunity to be a part of the landmark project.

“We all love Melbourne. Instead of just witnessing the history here, we want to be part of that,” Mr Lu said. “People in the future won’t need to wait for trains, or check the timetable, they can just show up and jump on the train.” Signal engineer, Liza Kierans, is also working on the project and said that she appreciates the variety and complexity of her work helping bring the Metro Tunnel to life.

“In my role, I get to be a problem solver daily,” Ms Kierans said. “Every day is different and novel, and our interactions with people are different, due to the problems we’re trying to solve.

“Success for me is getting high-capacity signalling into Melbourne for the first time ever. I think this project will show people that signalling is something you can actually cut a ribbon on.”