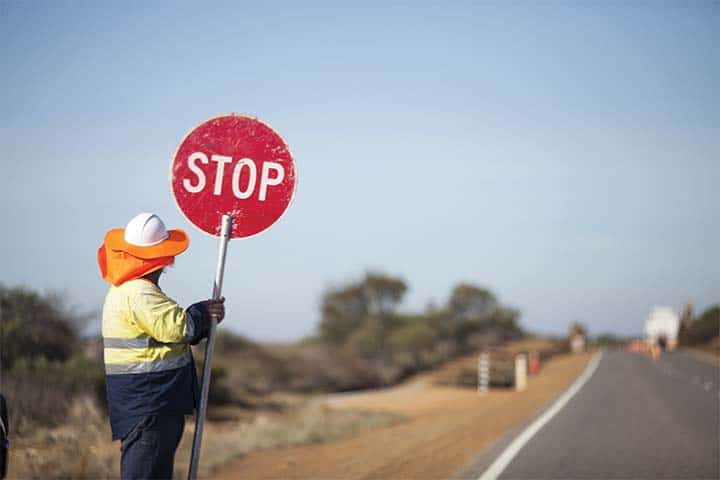 Federal and state governments have been pooling their funds recently, to green-light more and more road projects that secure the safety of our nation’s roads while also stimulating state economies. With the 2021–2022 Federal Budget’s announcement of a $1 billion booster shot to the existing Road Safety Program, here we take a look at some of the road safety initiatives happening around the country.

It’s no coincidence that the Australian Government has pursued a blitz in road safety projects, to the tune of $3 billion, ever since the national COVID-19 crisis took hold last year.

Indeed, the federal Road Safety Program, first announced in June 2020, is just the opening move in a ten-year-long federal infrastructure pipeline, priced at $110 billion, that will alleviate the economic losses of our ongoing health crisis.

Now secured until June 2023, the program adopts a “use it or lose it” funding approach to ensure fast action from states and territories, who must use their allocated funding within each six-month delivery period, or see the money returned to a federal pool for other jurisdictions.

The story so far

Australians have already done incredible work to significantly reduce road deaths and serious injuries in the past ten years. A report from the Office of Road Safety found that the number of deaths per one-hundred thousand Australians dropped by a massive 30.3 per cent when comparing 2008-2010 baseline levels to 2019.

The report also uncovered a significant drop in deaths associated with illegal Blood Alcohol Concentrations (BAC). These achievements speak to the work of countless road safety improvements, uptake of higher safety-rating vehicles, and no shortage of public health campaigns aimed at behavioural change.

Unfortunately, the work to make Australia’s roads safer isn’t finished. Our regional roads are still overrepresented as hotspots for death and serious injury, while safety projects in urban areas must find solutions that look out for vulnerable road users like cyclists and motorcyclists.

Road safety projects around the country

Since 2020, the Federal Government has bolstered road safety funding around the country through:

1. The Road Safety Program ($3 billion), which delivers funding to states and territories in six-month stages

2. The Targeted Road Safety Works Program ($500 million), an initiative to green-light critical projects that have safety benefit returns within 12 months

From just the first six-month tranche of the Road Safety Program funding, the NSW and Federal Governments have already pooled together over $400 million for road safety projects.

The NSW Minister for Regional Transport and Roads, Paul Toole, said that 150 of the 261 priority projects delivered across NSW were regional road projects.

“These projects will help prevent the loss of more than 538 lives and serious injuries on our roads over the project life – that’s the difference between 538 people making it home safely to their families at the end of the day.”

A notable federal contribution in NSW is $23 million for a massive rollout of rumble strips, or audio–tactile line marking (ATLM).

The statewide rumble strip rollout, delivered through the Targeted Road Safety Works program, is considered a “low-cost, high benefit mass infrastructure treatment” that could prevent as many as 394 fatal and serious injuries.

In the state’s capital, works are underway to address infamous levels of congestion. The Pinch Point Program, a three-year collaboration between state and federal governments priced at $240 million, uses small-scale road improvements such as intersection upgrades and the creation of new turning lanes to improve road safety while cutting congestion and travel times.

In Queensland, almost $300 million in federal and state funds has been launched into the first tranche of the Road Safety Program, $267 million of which was dedicated to regional Queensland.

Upgrades such as shoulder sealing, rumble strips and lane expansions on key regional arterials, will add to the already growing number of infrastructure projects in the state, including a jointly funded transformation of the Bruce Highway.

Queensland’s then-Acting Minister for Transport and Main Roads, Mark Ryan, noted in January that, “These projects will add to the record $26.9 billion in roads and transport projects being delivered by the Queensland Government over the next four years.”

Federal Member for Wide Bay and Chair of the Queensland Black Spot Consultative Panel, Llew O’Brien, suggested that the program reduces the number of “crashes causing death and injury by 30 per cent on average”.

In the nation’s west, the first tranche of the Road Safety Program unlocked $250 million in federally funded upgrades led by the cost-effective safety techniques of shoulder sealing and laying down rumble strips.

“From Western Australia’s world-class wool to the thriving iron-ore exports, local truckies work hard travelling the regional road network to keep the economy ticking along and businesses running by getting goods to markets,” Mr Buchholz said.

“By funding road safety programs like this, we are continuing to support the economy-shaping work while ensuring they make it home safe at the end of each trip – nothing is more important than that.”

With coverage of approximately 4,000km of regional roads, WA’s far-reaching approach to road safety includes projects on the Great Northern Highway, the North West Coastal Highway and the Albany Highway.

In Victoria, combined federal and state funding to the tune of $245 million has launched more than 100 road safety projects in the first tranche of the road safety blitz.

Regional projects have included upgrades for the Midland Highway between Daylesford and Guildford, for PortarlingtonQueenscliff Road at Portarlington, as well as improvements to safety barriers on the Western Highway.

In urban areas, works have included upgrading traffic signals on Plenty Road, and on Bridge Road near Yarra Boulevard in Richmond.

Since 2020, local government areas around Victoria have also benefited from $38.7 million of federal funding through the Load Roads and Community Infrastructure Program (LRCI).

This program covers the 2020-2021 rollout of the Black Spot Program, which has targeted 92 dangerous crash sites in Victoria, placing particular emphasis on addressing hazards in regional Victoria.

The South Australian Government has benefited from more than $100 million under the first tranche of the Road Safety Program. The Premier of South Australia, Steven Marshall, recognised the two-fold benefits of the program earlier this year.

“Getting work underway on these projects now means we are delivering safer roads and supporting around 500 local jobs through economic stimulus at a time it is needed most,” Premier Marshall said.

A major Road Safety project currently being deployed in South Australia is the Regional Road Network Package, which targets corridors like the Stuart Highway, the Yorke Highway, the Dukes Highway and the Riddoch Highway.

The project involves pavement treatments, shoulder sealing, and other safety enhancements, to the advantage of both the freight industry and regional South Australians. The package benefits from $41.6 million in Australian Government funding, with works due to finish in 2022.

The Federal and State Governments together committed $45.6 million in road safety projects for Tasmanians under the first round of Road Safety Project funding. Funding will involve upgrades like shoulder sealing and rumble strips to achieve road safety outcomes.

Tasmanian Minister for Infrastructure and Transport, Michael Ferguson, noted that while the upgrades undoubtedly boost local jobs and the state economy, everyday Tasmanians stand to benefit, too.

“The projects being funded – no matter how big or small – could make the difference in someone getting home safely to their loved ones, which is why we continue working to move closer to zero fatalities through these investments.”

A recent safety project targeted towards pedestrian road users is the Campbell Town Pedestrian Underpass, which empowers pedestrians,  including school students, to safely navigate this intersection of the Midland Highway.

The first six-month tranche of road safety projects in Australia’s north saw a federal contribution of $33.3 million matched by $13.7 million from the Territory Government.

A leading project of this funding has been the construction of a new overpass at the Tiger Brennan Drive/Berrimah Interchange, a busy intersection that has tragically seen fatal crashes.

Other ongoing works in the Territory include the strengthening and widening of both urban and regional sections of the Stuart Highway, as well as the replacement of deteriorating asphalt surfaces in urban areas like Darwin, Palmerston and Alice Springs.

Canberrans are also starting to experience the benefits of joint federal and territory road safety projects. The $10 million Intersection Upgrade Package is a state and federal funding collaboration in the ACT, aimed at reducing congestion and improving safety for all.

Intersections included in the package, which is scheduled to complete works in late-2021, include:

Territory and Federal Governments have each contributed $1.6 million to the Targeted Road Safety Works program.

One project under the program aimed at combating congestion is the installation of variable speed signs, CCTV cameras and other technologies on the Tuggeranong Parkway, to allow the enforcement of a variable speed limit system.

Despite renewed federal funding, the delivery of a road safety blitz during a global health crisis will be met with challenges. CEO of Roads Australia, Michael Kilgriff, urged federal regulators in May to consider a shortage of skilled international laborers as a constraining factor on economic rescue via infrastructure spending.

“If we want to realise the benefits these major infrastructure projects can deliver, there needs to be greater flexibility offered to industry to secure skilled workers.”

Responding to industry concerns about laborer availability, the Federal Minister for Immigration, Alex Hawke MP, announced in June that 22 new occupations would be added to the Priority Migration Skilled Occupation List (PMSOL).

The safety of laborers has also been called out as a required assurance of the Federal Government’s ten-year infrastructure pipeline. Mr Kilgriff, believes it’s “imperative that more is done to make sure on-site workers who construct and maintain our roads can do so in a safe environment”.

“Our industry’s workforce is firmly focused on keeping the community safe… it is only fair that this commitment is repaid by ensuring their exposure to danger is minimised and they get home to their families safely at the end of each working day,” Mr Kilgriff said.

The federal infrastructure pipeline will also need to rise to new standards of environmental sustainability, such as through use of recycled materials in construction projects, to satisfy state targets and pass community scrutiny.