The awards were announced at a major online industry event held on 26 August.

The Award is fiercely contested by the largest construction and engineering businesses operating in Australia, whose projects must first qualify to be finalists and then submit to the most rigorous assessment by an independent panel of experts.

“A positive industry culture has the potential to make a good project great and the winners are proof of this,” Mr O’Rourke said.

CEO of Engineers Australia, Dr Bronwyn Evans AM, praised the finalists for their complexity and creativity.

“Congratulations to all finalists for delivering such ambitious and innovative projects under such difficult circumstances, bringing together engineers from multiple technical backgrounds to deliver extraordinary constructions,” Ms Evans said.

Now in its 24th year, this premier construction industry Award has again been partnered by some of the major businesses connected with the industry including Caterpillar, Cbus, Holcim, Infra Build and Oracle Construction and Engineering. 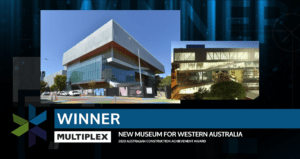 A redevelopment of the existing WA Museum, the project included the design and construction of a new building that integrates with the existing heritage buildings, and heritage restoration works to the Old Gaol, Jubilee, Beaufort and Hackett Hall buildings.

It also includes a Central Energy Plant (CEP) servicing the Perth Cultural Centre, and is expected to reduce energy use and CO2 emissions by around 30 per cent in the year after the new museum is operational.

The judges comments mentioned that Multiplex demonstrated a significant culture of de-engineering safety risk, which created a very safe working environment for all workers and stakeholders.

The judges also focused on the project’s excellent cost control, particularly when asked for client changes. Stating that the design was in harmony with local surroundings and enhanced new construction with the historic buildings, including 85 per cent local content.

The judges commentary commended the project, stating that innovation was strongly evident, and that the team and the 30 government stakeholders were cohesive, agreeing it was a fantastic outcome for the WA Museum.

The other ACAA Finalists for 2020 were: 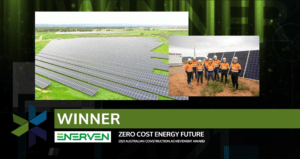 Zero Cost Energy Future, SA, was delivered by Enerven, who engineered, procured, constructed and commissioned over 150MW of solar PV and 16MW/34MWh of energy storage across 33 South Australia water brownfield and greenfield sites, in metropolitan and regional areas of the state, in less than 24 months.

This infrastructure delivery was part of SA Water’s program to see the energy they generate and export to the market, off-set the cost of the electricity they draw from the grid and network charges – to achieve a zero-net outcome.

The judge’s comments mentioned that the project set a significant legacy for both the construction industry, but more importantly, major utilities like SAWater.

The judges commended the project for developing both standards and a general methodology for delivering projects of this scale, providing the water industry with a pathway forward towards zero‐cost energy and materially.

The judges praised the project for reducing its carbon footprint, stating this is a significant societal outcome given it is a carbon intensive industry involving significant pumping and treatment.

The other ACAA Finalists for 2021 were:

The Award presentation and details about the finalists’ projects are available at http://www.aca.net.au/