The Coffs Harbour bypass has released a shortlist of companies invited to tender for construction of the project.

CPB Webuild Joint Venture, Acciona Seymour Whyte Joint Venture and Gamuda Ferrovial Joint Venture have been selected to take part in the tender process, which will be finalised by the end of 2021, with the successful contractor to be announced mid-2022.

New South Wales Deputy Premier and Minister for Regional Transport and Roads, Paul Toole, said this is a significant step towards a project that will transform the region. 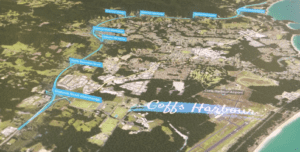 “This will be the biggest infrastructure project in Coffs Harbour’s history, removing more than 12,000 vehicles a day from the centre of town, bypassing 12 sets of lights and saving around eleven minutes in travel time,” Mr Toole said.

Federal Member for Cowper, Pat Conaghan, said the bypass will deliver an economic boost to the region, creating about 12,000 jobs during construction.

“Not only will locals get work, but they’ll also get valuable training and experience that will be transferable to many careers or business ventures,” Mr Conaghan said.

“Supporting businesses will also enjoy a boost, as seen up and down the coast during the recently completed Pacific Highway upgrade.”

State Member for Coffs Harbour, Gurmesh Singh, said the project is also having flow-on effects for the regional economy.

“We’ve signed up 13 local builders to carry out work on a range of at home-noise treatments including seals to windows and doors; reglazing with acoustic glass; installation of air conditioning; acoustic insulation; or relining of exposed walls,” Mr Singh said.

“More than 30 local businesses have also been engaged for the preliminary work now taking place and there will be more opportunities for local suppliers as work progresses.”

Three tunnels will be built for the bypass at Roberts Hill, Shephards Lane and Gatelys Road, delivering safer and quicker journeys for the thousands of locals, tourists and freight operators who use this route daily.

More information is available at www.pacifichighway.nsw.gov.au/coffsharbourbypass.