The Western Australian Government has revealed the first images of Perth’s soon-to-be-built METRONET Whiteman Park Station, with passengers set to step off the platform and into a green park space.

The station will be elevated, and a new underpass will be built under Drumpellier Drive, providing better connections for Brabham residents and linking the growing community with the new train station and Whiteman Park. 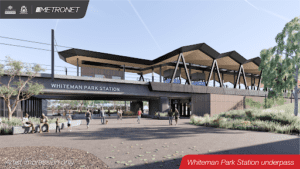 The populations of Brabham, Henley Brook, Dayton, Bennett Springs and Caversham are set to boom over the next decade with an expected 12,000 new homes to be built for the 32,000 people choosing to live in the area by 2036.

It will be a 25-minute trip from the Perth CBD on the new Morley-Ellenbrook line, slashing 20 minutes off of the current trip by bus.

More than one million people visit Whiteman Park each year, making it a popular tourism attraction.

To make the most of investment in the growing area, a draft 30-year Whiteman Park Station Precinct Concept Master Plan is being developed and will open for public comment in the coming months. 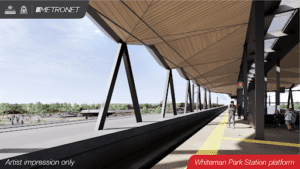 Major works on the METRONET Morley-Ellenbrook Line are continuing, with clearing now starting on the northern end of the line including north of Marshall Road in Bennett Springs, alongside Drumpellier Drive in Brabham, and in Ellenbrook.

Initial works include clearing for the train line and stations at Malaga, Whiteman Park and Ellenbrook, as well as preparing for road-over-rail bridges at Beechboro Road North and the Gnangara Road/Drumpellier Drive intersection.

All of this is in preparation for major construction to start on the northern part of the Morley-Ellenbrook Line in early 2022.