Sydney’s WestConnex project has just marked a significant tunnelling milestone and is now moving into its next exciting phase.

In October, the final tunnel breakthrough took place on the M4-M5 Link Tunnels, part of the third and final stage of the project, bringing this critical link in the WestConnex project one step closer to completion.

As well as building 7.5km twin tunnels, the M4-M5 Link Tunnels will transform the liveability of the city by taking cars and trucks off surface roads, easing congestion for motorists, and improving liveability for local communities.

The $3.2 billion tunnel will open in 2023, and will help to slash a trip between Parramatta and Sydney Kingsford-Smith International Airport by up to 40 minutes.

The benefits of an eight-minute link between the New M4 Tunnels at Haberfield and the M8 at St Peters will also be fully realised for Sydney’s commuters, families, and businesses. The first of two final breakthroughs occurred at Leichhardt, 43m below the surface. Image supplied by WestConnex/Transurban.

Usually, major tunneling milestones are welcomed with a panoramic banner, pumping music, gatherings of celebratory construction workers, media, and politicans tossing hard hats high into the air, as the roadheader is seen breaking through into sight.

Due to the COVID-19 restrictions gripping Sydney at time of writing, such an event was not possible to celebrate the tunnel breakthrough.

Instead, we captured some stunning pictures (fresh off the press for this publication) and video, so as many people as possible could share the moment safely.

More than 9,000 workers have been involved in building the M4-M5 Link Tunnels, and the milestone reflects the tremendous team effort in reaching yet another goal, while ensuring the safety of every individual and every work site remains the number one priority.

The complexity of the project is shown in the stats and facts: the tunnels are up to 34m wide and eight metres high – some of the widest in Australia, at an average tunnel depth of 35m below the surface.

In another national record, since construction began in 2018, 28 roadheaders have been used across the project, making this the greatest number of roadheaders used on a single project anywhere in Australia.

The final breakthrough occurred approximately 43m underground at Leichhardt, though at the deepest point around Newtown, the tunnels are around 55m underground.

The contractor has been responsible for excavating 22km of tunnels and ramps, moving 8.4 million tonnes of spoil to date, including up to 4.5 million tonnes of sandstone to help support construction of the runway, taxiways and roads for the new

Western Sydney International (Nancy-Bird Walton) Airport. With more than 70 per cent of the road surface now laid, mechanical and electrical fit out is now underway below the surface.

The critical link to a safer, faster, smoother journey

The M4-M5 Link Tunnels will return local streets to local communities, improving safety and easing congestion to get people where they need to be sooner. We’ve already seen traffic volumes reduced by a third on Parramatta Road since the opening of the New M4 Tunnels.

By 2033, with a completed WestConnex network, Sydney Gateway, Western Harbour Tunnel, Beaches Link and M6 Stage 1, more than 100,000 trips per day1 are expected on this motorway, instead of local surface roads.

Around 4,000 vehicles are forecast to be taken off King Street and an estimated 3,000 fewer vehicles will use Sydenham Road each weekday2.

The mainline tunnels will be approximately 7.5km long and accommodate up to four lanes of traffic in each direction, and motorists will have the option to remain underground in the New M4 Tunnels and continue to travel to the St Peters Interchange, onto the M8, or connect to the Rozelle Interchange. 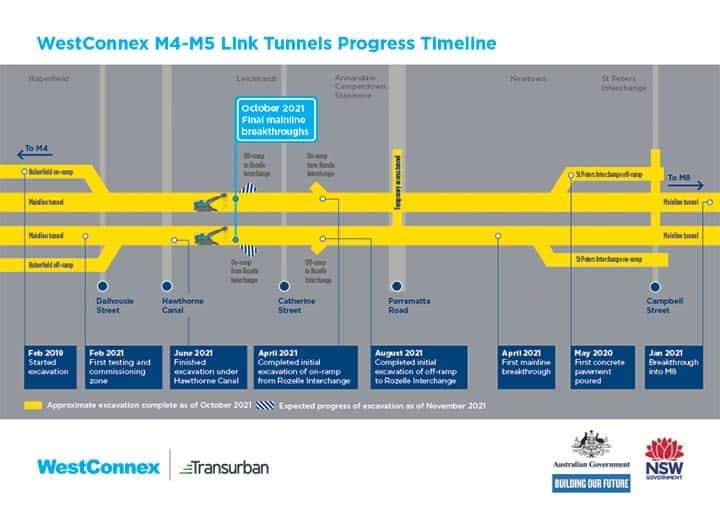 WestConnex is not just about a faster, safer journey and marking construction milestones. This project will also deliver a long-term legacy for local communities.

In one of the most detailed studies of air quality around tunnels in Sydney’s history, an independent scientific study showed a ten to 15 per cent improvement in air quality along the Parramatta Road corridor, since the opening of the WestConnex New M4 Tunnels in July 20193.

These healthy air quality results are great news for residents, schools, businesses and local community members in nearby suburbs including Ashfield, Haberfield, Burwood and Canada Bay.

Moving traffic underground has accelerated any improvements which would be achieved with just the use of cleaner, fuel-efficient vehicles, and world class technology and ventilation outlets have led to a substantial, permanent improvement in air quality for the community.

WestConnex is also freeing up large areas in communities that are being transformed into more than 18ha of parks, playgrounds and recreational facilities, like Ismay Reserve in Homebush, and the largely underground motorways are contributing to improved liveability for residents and business along the corridor.

Building an even better journey

The first stages of WestConnex have already delivered significant travel time savings for motorists, and the M4-M5 Link Tunnels will continue to reduce traffic and congestion for motorists, families and businesses by completing a 33km traffic-light free motorway network with links to western and south-western Sydney.

As COVID-19 movement restrictions ease over the coming months, construction on the M4-M5 Link Tunnels will only increase in momentum, as we build a world class underground tunnel to deliver an even better journey for motorists.

With 40 per cent of Sydney’s population expected to live within 5km of WestConnex4, and 80 per cent of the Greater Sydney Freight Task undertaken by road5, WestConnex is well positioned to support Sydney’s transport needs.

1 Cumulative: the road network with NorthConnex, King Georges Road Interchange Upgrade, the New M4, the New M5 (Renamed M8) and the M4-M5 Link tunnels open to traffic and, in addition, with the proposed Sydney Gateway and Western Harbour Tunnel projects complete and operational (2023); and with the proposed Beaches Link and M6 Stage 1 on projects complete and operational (2033) community-guide-to-m4-m5-link-eis.pdf (wordpress.com)
2 http://majorprojects.planning.nsw.gov.au/index.pl?action=view_job&job_id=7485
3 NIWA Client report (westconnex.com.au)
4 By 2031, based on Deloitte Access Economics estimates and Transurban’s own internal estimates and assessments.
5 NSW Freight and Ports Plan, Part 2: The State of Freight. http://www.transport.nsw.gov.au/projects/strategy/nsw-freight-and-ports-plan-0/part-2-state-of-freight#The_Greater_Sydney_freight_network