Crews on the Metro Tunnel Project are preparing to lay tracks through the completed tunnels and install rail systems after the delivery of almost 40km of rail to the tunnel’s western entrance.

These tracks and rails will be installed through the project’s twin 9km tunnels, moving the project closer to reaching its goal of accommodating half a million extra passengers on the rail network during the peaks every week.

Work on the rail tunnel and station fit-outs have been ramping up since four tunnel boring machines finished the 9km-long, 6.3m-high rail tunnels in May 2021, excavating more than 600,000 cubic metres of rock and soil.

At the five new stations – Arden, Parkville, State Library, Town Hall and Anzac – crews are installing features such as escalators and lifts and fitting out back-of-house equipment rooms. The station platforms are taking shape up to 30m underground, along with ceilings, stairs, walls and mechanical and electrical systems.

Inside the tunnels, crews are fixing brackets and cable trays to the tunnel walls to hold electrical and communication cabling in place, as well as installing fire safety pipework and signalling equipment.

Specially designed gantries with bespoke “zero gravity” lifting arms travel along the length of the tunnels on wheels, allowing workers to carefully manoeuvre the equipment into place as they go. These machines make working on the project much safer by reducing the need for manual handling.

Across the 18km of tunnel length workers will install almost 50,000 brackets, 15km of elevated steel walkway for emergency and maintenance access, almost 500km of electrical and fibre cables, 16km of pipework to carry fire retardant, and more than 3,000 lights.

Installing the track will take up to a year, beginning with crews laying 4,000 high-performance precast concrete panels through the twin tunnels. There are 300 different panel shapes to account for the varying curvature and elevation of the tunnels as they wind from Kensington to South Yarra up to 30m underground.

From mid-2022, crews will install 165 metre lengths of steel rail, progressively clipping them to the concrete panels and welding them together to form a continuous rail line along the length of the tunnels. 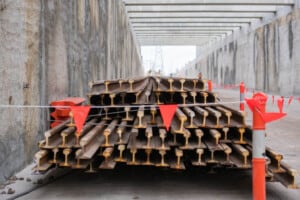 Once overhead power and the new high-tech signalling is installed in the tunnels and stations, along with more than 2km of platform screen doors, testing will begin in the tunnels with Melbourne’s new fleet of bigger, more modern trains in 2023.

“Whether it’s building schools, hospitals, upgrading roads or building the Metro Tunnel – we’re delivering our promises and getting things done.”

Minister for Transport Infrastructure, Jacinta Allan, said, “It’s exciting to see the Metro Tunnel take a huge step from a construction site towards its future as a functioning rail tunnel that will change the face of public transport in our city.”

When it opens in 2025, the Metro Tunnel will create a new end-to-end line from Cranbourne/Pakenham in the south east to Sunbury in the west.