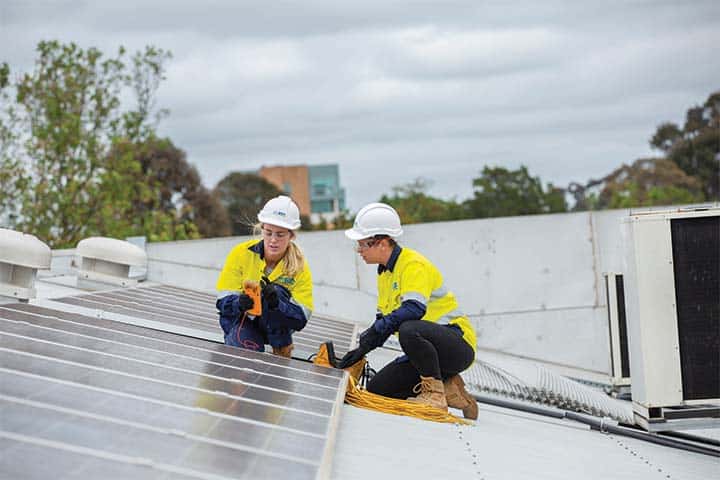 Attracting more women to traditionally male-dominated trades isn’t just a well-meaning election promise – it’s an economic necessity. Victoria’s $80 billion public infrastructure boom is a critical part of the Victorian Government’s recovery from the pandemic so maintaining the pipeline of workers is essential.

The Government formed a new entity – Apprenticeships Victoria (AV) – in late 2020 with a mandate of creating opportunities for 1,500 apprentices and trainees a year, with female recruits a key part of the strategy.

Barriers to pursuing a career in the trades have caused significant under-representation of women, meaning a huge untapped labour resource for industry, from school-leavers to middle-aged career changers.

Cameron Baker, Apprenticeships Victoria Executive Director, said, “There are a huge number of projects taking shape in Victoria right now, meaning the need for qualified tradespeople is greater than ever.

“Women have traditionally been under-represented in areas such as plumbing and electrical work, but we’re using these initiatives to redress the balance. There are opportunities for everyone.”

Women on the tools: the ten ‘women in trades’ projects

Run by Ai Group’s Centre for Education and Training, Women in STEM will recruit 30 women into apprenticeships in engineering and 20 into traineeships in ICT and Industry 4.0.

Sonya Casey, Project Consultant for Women in STEM, said, “Careers in these sectors can be very rewarding and there are plenty of opportunities, but they are still areas dominated by men. We want to change women’s perspectives on these careers and help them find secure, well-paying jobs.”

Women on Track is a paid traineeship program dedicated to placing ten underprivileged women who are looking to kick-start their careers into roles in the rail industry.

SPRINKS is an initiative aimed at recruiting 30 female school leavers into the Fire Protection Industry by providing pre-apprenticeship training and enabling women to build connections with employers.

Shannon Fogarty, NFIA Director – Member Workplace Support, said, “Fire protection is a growing industry, with service and construction work, and is increasingly being recognised for its vital safety role.”

NECA Education and Careers – Women and Their Trade (WaTT)

WaTT will enable 25 women to complete electrical apprenticeships over the next two years, arming them with the tools, resources and support for a rewarding career.

Elise Halton, WaTT Program Project Mentor, said, “In the industry there is not enough diversity and inclusivity of women in a trade where there should be, and we need to take steps to assist that process.”

The program will focus on building a culture of inclusiveness, connecting the apprentices to the Boeing early career network, buddying and formal mentoring, as well as providing them with industry-knowledge and industry networking opportunities.

Delivered by The Centre for U, the Women in Apprenticeships Victoria Electrical (WAVE) project aims to donnect 30 women undertaking electrical pre-apprenticeships to experienced industry mentors through a digital community of practice application, providing ‘just in time’ support and developing a network of connected peers.

“Mentors will support women entering the electrical trade as they make the transition from an electrical pre-apprenticeship to employment in the electrical industry,” said Carmel Veenstra, WAVE Project Manager.

This aims to tackle perceptions that prevent women from considering plumbing as a career. The project offers paid pre- apprenticeship opportunities and direct entry into a Master Plumbers apprenticeship.

Peter Daly, Master Plumbers CEO, said, “While there are 30,168 qualified plumbers in Victoria, only 101 of them, about 0.3 per cent, are women. “Once this pilot program has been completed, there will bealmost 50 per cent more women in plumbing in Victoria.”

CareersPlus will support 150 women into apprenticeships and traineeships over the next two years by raising awareness and providing clear avenues into the industry.

Janet Cribbes, CEO of Tradeswomen Australia, said, “Our research shows us that women want to enter trade careers but don’t have the networks to do so – so we fill that gap by providing the essential support and confidence-training that can make their dreams a reality.”

The program offers a network of tradeswomen, employers and community organisations to help women into entry-level, apprenticeship or established roles, plus mentoring through workshops and online.

The Accelerating Women in Auto project will create opportunities for 60 women to enter the industry with a Certificate II in Automotive Servicing.

The Women Only Multi-trade Pre-apprenticeship will give 120 women the opportunity to try a range of trades over 6-12 weeks. It will also support host employers to find the best possible fit for their business when looking to recruit an apprentice or trainee.

Abru Meher Jahan was born and raised in Dhaka, Bangladesh, and came to Australia in her mid-teens. She worked in retail roles before taking a break in 2018 to start a family.

When she was ready to rejoin the workforce, she wanted to do something fulfilling. However, having been schooled overseas made it difficult for her to access study in Australia.

When she discovered Downer’s Women on Track apprenticeship program, she knew it was just the boost she needed to kick-start her career in trades.

“When I saw the job, I wanted to combine studies and work, to help me financially and get a certificate at the same time,” Abru said.

“I’m loving the job, really enjoying the work and the people.”

Amy Hutchinson comes from a family of male plumbers and said it took her a while to realise she wanted to follow in their footsteps.

“To me, it is incredibly important for people to realise that they can literally do anything, and gender bias in a career needs to be completely eradicated. It’s one thing to talk about helping women but it’s another to actually do it and that’s what is happening here.”

“It wasn’t until just after COVID-19 hit when I decided it was time to put the boots on and give it a go. I was lucky enough to get a job with Tullamarine Plumbing and Drainage and I feel that I’m finally somewhere I can see myself for a very long time.”