Revolutionary switchgear for the next generation of electricity distribution

Across all industries, sustainability objectives are put in place to progressively increase the efficiency of operations, with ambitious targets set to significantly reduce greenhouse gas emissions. To meet the targets, all parts of the operations must contribute and carefully review all opportunities to reduce energy consumption.

It was never really considered as a realistic possibility that low-voltage switchgear designs could also contribute to these objectives. However, as switchgear generates heat, the electrical room requires conditioning to maintain the required ambient temperatures.

Take, for example, an eHouse (prefabricated substation), which houses low-voltage switchgear that runs 24/7. Maintaining the switchgear at room temperature is key to the equipment performance, but also to ensure the guaranteed lifetime of all the components inside the switchgear. This requires a properly sized conditioning system to be installed, which in some locations might have to run every day of the year, every hour of the day. It is clear that the smaller the room is and the less heat the switchgear in it generates, less energy will be required for the conditioning systems.

ABB’s new switchgear NeoGear can significantly contribute to reducing  carbon footprint, simply thanks to the physical behaviour of laminated bus plate technology. Traditional busbar systems generate heat due to AC-losses caused by the skin-effect in the copper bars. The absence of these AC-losses in laminated technology reduces the overall switchgear heat contribution by up to 30 per cent.

In the the past few decades, low-voltage switchgear has transformed from large, fully open type of installations to today’s fully enclosed, compact, modular type. This progress came with significant improvements in safety and availability of the switchgear. However, the continuous effort to reduce switchgear footprint tended to come with a disadvantage: less space for electrical components, more difficult wiring and cable terminations and reduced rating. What may be visually perceived as available open module space in a switchgear line-up might not always be available, due to limits of thermal performance or maximum currents per section.

Thanks to ABB’s NeoGear solution, the switchgear can be up to 25 per cent shorter in length, and yet still allow up to 30 per cent higher maximum permissible watt loss per section – all while providing the same ease of access for cabling and termination.

The copper components have the conductive function, and the SMC material has the insulating function. These two components are bonded together in a special technological process, creating a sandwich structure merging the horizontal and vertical distribution busbar functionality into one single component ready for installation into switchgear panels.

In Figure 1, you can see a traditional horizontal and vertical busbar system in low-voltage switchgear, and on the right, an example of a laminated bus plate. Both have the same functionality. 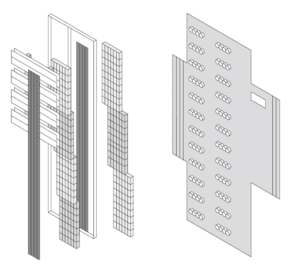 The laminated bus plate provides a great improvement in energy distribution. Let’s take an analogy: a train that consists of a locomotive in the front and ten wagons behind it.

The current that flows through electrical components generates heat. The force that the wagon connection can withstand is equivalent to a temperature limit that the IEC standard specifies to the manufacturers. The manufacturers are not allowed to exceed this limit specified by the standard.

Furthermore, imagine the switchgear’s feeder panel as a locomotive, and a motor control center (MCC) panel as a wagon. The LBP can distribute large amounts of current to large amounts of MCC sections without overheating. With this analogy, the LBP is a connection that can pull multiple times more wagons with two or more locomotives. 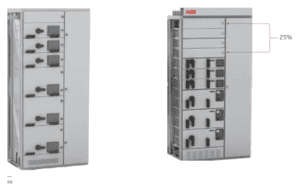 The physics behind making the lamination so much better

Compared to a traditional busbar system, the LBP provides a much larger surface, through which it is possible to transfer heat to the surroundings through ambient air (see Figure 3).

The performance of the laminated bus plate was reached by numerical simulations and extensive testing. It is commonly understood that the current density is closer to the surface in a standard conductor (see Figure 4), which increases heat generation. 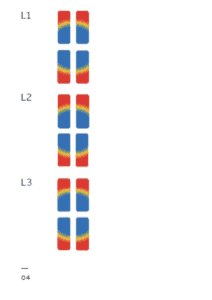 The LBP, on the other hand, is fully able to use the cross-section, by reducing the distances between the phases, the thickness of the conductor and increasing its height.

In this case, the skin and proximity effects do not occur, and the current is evenly distributed, (see Figure 5). Moreover, eddy current losses were reduced by 20 per cent with reduced conductor distance in the LBP. 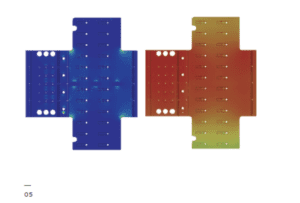 The laminated bus plate was developed to efficiently transport current within LV switchgear.

It combines the high capability of transporting high current in a compact size and allows the switchgear manufacturer or panel builder to increase the number, or size, of features that are important to the end user.

This is especially beneficial in motor-controlled centers in LV switchgear, where the size of the modules influences the number of components that fit into it. This means it is directly influencing the functionality of each module and the whole switchgear system. Through its design it offers unique safety features that avoid arc ignition making it the safest switchgear on the market.

There are many more benefits for the LBP users, such as the fully insulated busbar system by default, classified as an arc-ignition protection zone in accordance with the prerequisites set out by the IEC TR 61641 (ed. 3) chapter 6. The LBP also offers ingress protection IP4x, which means it cannot be penetrated by a solid object of 1.0mm (0.04in.) or more in diameter. In the arc proof design version even IP42, which further means it offers protection against water drops falling vertically over a 15° range.

The LBP is designed in such a way to fulfil the highest demands on safety; keeping operators’ hands safe from live parts by utilizing pin guards installed on the connection between modules and LBP in the MCC section. The Contact Guard system is designed to prevent accidentally touching the live part.

All these features allow us to claim that LBP is defined within Arc Ignition Protected Zone (AIPZ) inside the LV switchgear.

Arc Ignition Protected Zone means that an arc will never occur in such a place. Application of AIPZ in ABB’s NeoGear low-voltage switchgear is shown in Figure 6. 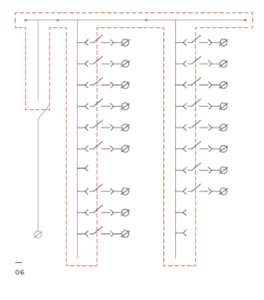 When creating new products, research and development teams can advocate and design products that minimise energy consumption. Technological innovations that lead to more energy efficient equipment translates into energy savings and a reduction in environmental impact to help us fight climate change. In all ways imaginable, companies in all industries must continue to push the boundaries to ensure smarter, more sustainable products and ways of working.

This sponsored editorial is brought to you by ABB. For more information, go to https://campaign.abb.com/ABB_Neogear.