Both Melbourne and Sydney airports have seen a steady recovery in passenger numbers since interstate and international borders reopened.

More domestic passengers flew through Melbourne Airport in March than in the month the COVID-19 pandemic took hold in Australia, as relaxed border restrictions and the Labour Day long weekend encouraged Victorians to travel.

But the airport welcomed 1,516,539 domestic passengers, which is higher than the 1,256,064 domestic travellers processed in March 2020 when pandemic restrictions were introduced. 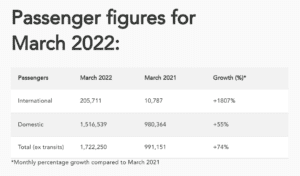 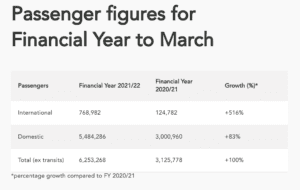 The number of international travellers using Melbourne Airport was also the highest since Australia’s border reopened.

Domestic performance was helped by the reopening of the Western Australian border and an increase in airline capacity. 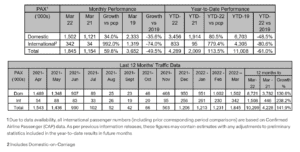 Sydney Airport CEO, Geoff Culbert, said, “We continue to see a steady recovery in domestic passenger numbers at 64 per cent of pre-COVID levels, with an additional 500,000 domestic travellers making their way through the Domestic terminals in March.

Melbourne Airport CEO, Lyell Strambi, said the growth in demand was pleasing, but warned it presents challenges as the aviation industry works to rebuild.

“COVID-19 decimated airlines and airports and resulted in thousands of highly-skilled workers being stood down or made redundant,” Mr Strambi said.

“The airlines and their suppliers are now scaling up their workforce but given the safety-critical nature of the jobs they do; recruitment and re-training can take time.

“As aviation recovers it’s important we look to the future, and that’s why we are upgrading our terminals and moving ahead with plans for a third runway, so that we have sufficient capacity to cope with forecast demand.”

Melbourne Airport’s runway plan is currently on public exhibition, with submissions open until 16 May 2022.