About a year ago I stepped into the role of CEO at Hobart Airport. As the major gateway to Tasmania, with nearly 60 per cent of visitors to the state passing through its doors, the airport’s success is intrinsically linked to Tasmania’s. 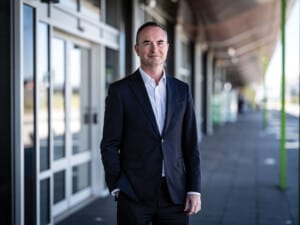 Tasmania is poised to take off. It’s viewed globally as unique and safe, it has outstanding  environmental credentials, and it has a strong and prosperous economy.

Tasmania can already generate 100 per cent of its energy from renewables and has a target to double that, and it has achieved net zero in six of the last seven years. In January, CommSec ranked Tasmania’s economy as the best performing in Australia for the eighth quarter in a row.

Hobart Airport’s purpose is connecting communities. Connection is at the very core of what we do, bringing people and communities together.

We’re a host, a caretaker, a friend and a genuine member of the countless communities that make up Tasmania and the world we open our arms to. We’re one of Tasmania’s most strategically important pieces of infrastructure, serving passenger flights, cargo flights, rescue helicopters, and Australia’s air link to the frozen continent Antarctica.

The world, and the aviation industry in particular, has been through a tough couple of years of pandemic-induced slowdown. As we emerge from this period we need to evolve and adapt, and help build Tasmania’s future.

We’ve built new connections over the last year, with new domestic routes and more airlines flying on them, to Perth, Adelaide, Canberra, the Gold Coast, and the Bass Strait islands.

We’ve brought international flights back to Tasmania after more than 20 years with the launch of Air New Zealand’s flights between Auckland and Hobart. We’ve seen Tasmania’s incredible cherries, crayfish and abalone flying to Hong Kong on seasonal cargo flights with Cathay Pacific.

Hobart Airport has a solid foundation, but now we need to do more to unlock the next phase of growth. The Hobart Airport runway is probably the most important stretch of asphalt in Tasmania. In 2017 it was lengthened to allow larger widebody aircraft to land.

Now we need to strengthen the original section of it to allow them to operate without restrictions. Widebody aircraft are restricted in how much fuel and payload they can take on by the strength of the original runway. This means an aircraft can’t load up with enough fuel to fly non-stop to Hong Kong or Singapore and has to stop on the mainland to refuel.

Even stopping on the mainland, they still can’t take on a full load of cargo in Hobart. Upgrading the runway will allow these aircraft to take off at Hobart Airport fully fuelled and fully laden.

This would allow the airport to expand Tasmania’s opportunities. We could expand international freight capability to allow non-stop flights to Asia, growing Tasmania’s agribusiness by allowing express delivery of the state’s premium produce.

Imagine direct flights to Hong Kong or Singapore without stopovers. For many visitors there is a ‘mental block’ of having to get to Hobart via a stopover in Melbourne or Sydney. These upgrades will increase the aviation capability of the Tasmanian Antarctic Gateway. Upgrades to both the port and airport are essential to cement Hobart’s position as the gateway to the Antarctic for Australia and other countries.

They will cater for potential future Defence air operations from Hobart, such as search and rescue in the Southern Ocean. Upgrading Hobart Airport will ensure that we seize these opportunities that greatly benefit Tasmania.

The return on this investment will be huge and it won’t be confined to the cities. It’s an economic enabler for the whole state and the positive impacts would be felt across Tasmania, throughout the regions, from King Island to Kettering.

A recently commissioned KPMG analysis confirmed that we have the chance to create nearly 1,300 jobs around Tasmania and create an additional $122 million in economic activity each year.

This upgrade will help Tasmania to grow, expand our economy, and create more jobs for Tasmanians. Importantly, it will go a long way to helping us connect communities across the country and around the world.

The strategic investments we make now have the capacity to pay massive dividends by helping build Tasmania’s future.