The Bell to Moreland level crossing removal project has received the highest sustainability rating and green star rating for works completed at Moreland and Coburg Stations in Melbourne.

The Infrastructure Sustainability Council (ISC) has awarded the Moreland level crossing removal project in Melbourne its highest rating ever, with a score of 98 points for sustainability.

The score of 98 points for the Moreland project that established two Melbourne Cricket Grounds worth of open space (the unique Victorian unit of measurement) under the new elevated rail line, is the highest As Built rating ever to be awarded by the ISC. 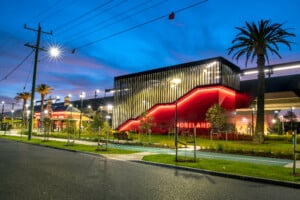 ISC Ratings are calculated by assessing sustainability elements, covering everything from environmental management, stakeholder participation, climate change resilience, community health and wellbeing, as well as the design and protection of heritage buildings.

The ratings are scored out of 100, with 10 bonus points available for innovation.

Green Star is a sustainability rating awarded by the Green Building Council of Australia (GBCA). It’s an internationally recognised rating system that assesses the sustainability outcomes from the design and construction of new buildings or major refurbishments.

The Bell to Moreland project involved the removal of four dangerous and congested level crossings in Melbourne’s north, including Moreland Road in Brunswick as well as Reynard Street, Munro Street and Bell Street in Coburg.

Two new state-of-the-art stations were built at Coburg and Moreland, and 2.5km of new open space was welcomed by the community, with walking and cycling paths with bike repair stations, active equipment, playgrounds and dog parks. 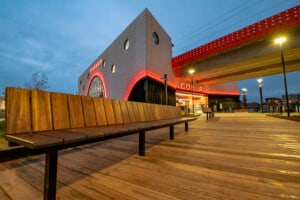 Some of the sustainability highlights on the Bell to Moreland project include:

Two new state-of-the-art stations were built at Coburg and Moreland, and 2.5kms of new open space was welcomed by the community, with walking and cycling paths, bike repair stations, active equipment, playgrounds and dog parks.

It has been more than six months since the Bell to Moreland level crossing removal project wrapped up.

Melbourne’s Level Crossing Removal Project is removing 85 dangerous and congested level crossings from across the city by 2025, with 64 gone for good already.