Construction of the south half of Central Station’s new underground concourse is nearing completion, with eleven escalators installed for access to several platforms, and is expected to be open to the public by the end of the year.

Part of Central Walk is expected to open by the end of the year, which will connect customers to suburban, intercity and regional rail services, and light rail. 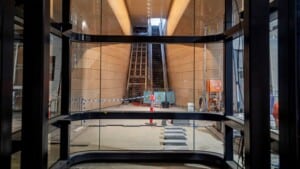 Central Station escalators as viewed from inside a lift. Image courtesy of Sydney Metro.

Fit out and finishing work has been completed on the south half of Central Walk, and eleven of the 15 new escalators have been installed

The distinctive wall panels along Central Walk are made up of 784 glass-reinforced concrete panels, with the longest measuring 4.5m. A total of 3,000 panels will be installed at Central Station as part of the redevelopment. 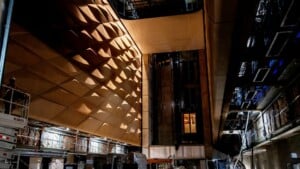 38,000 tonnes of rock were removed to construct Central Walk, which is the equivalent of six Olympic swimming pools.

Work has been completed under the feet of Central Station customers, with the construction of Central Walk taking place below eight live suburban platforms and tracks. 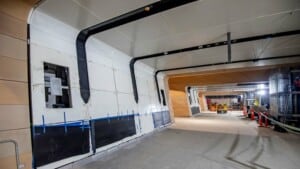 When this section is open, customers will be able to directly access Platforms 16 to 23 by escalators and lifts for the first time, which will connect them to the Eddy Avenue forecourt.

Customers from suburban platforms will also be able to access the new metro platforms through Central Walk once Sydney Metro City and Southwest services start in 2024.