Why changing how we pay for transport is a good move

In both phases of COVID-19 lockdown in Melbourne, roads have been eerily quiet as numerous businesses, venues and attractions have been forced to close. But as we saw when restrictions initially eased throughout June, peak hour traffic jams re-emerged as more people opted for private transport to maintain social distancing. 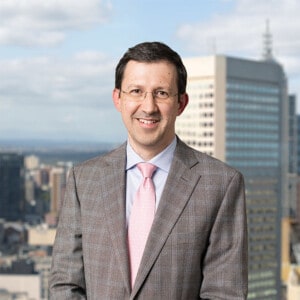 Infrastructure Victoria recently released new research that looked at ways to ease the transport squeeze in the state.

This work is even more relevant for supporting Melbourne’s crowded peak hour transport network with the short-term and long-term challenges resulting from COVID-19.

Our findings showed that by changing the way we pay for transport, we could reduce the amount of time people spend in congested peak traffic by eight per cent and increase traffic speeds by up to 25 per cent within inner Melbourne.

In this example, up to 85 per cent of people could be better off, paying less than they do today for transport.

While building new roads and rail can deliver needed transport services, analysis, evidence and experience demonstrates that they only relieve congestion temporarily.

Network-wide pricing reform has the potential to dramatically improve how we move around our cities, provide greater choice and make the best use of our existing infrastructure.

It also offers the best prospects for managing the transport transition to a post-COVID-19 world.

While Melbourne is again in Stage 3 lockdown restrictions, at some point those will ease, and life and work will eventually settle into a new kind of normal.

Governments and businesses will again face the challenge of moving the workforce and tourists around our city safely.

A return to commuters packed like sardines in peak hour is simply not an option given the requirement for social distancing.

The need for change has come at a time when Melbourne’s transport system was already under pressure.

Our modelling showed that if we don’t change, things will continue to get worse. By 2030, an additional 3.5 million trips would be made every day across Melbourne’s road and public transport networks alone, leading to the cost of congestion rising to $10.2 billion per year.

If social distancing requirements and heightened community concerns regarding mass transport continue, this is likely to mean more people will choose to travel by private vehicle.

For many office workers across Melbourne, if the price they pay to travel is reduced during off-peak times then this will make it more attractive to travel off-peak.

This will make it easier for workers to make better use of our transport system while maintaining social distancing.

What are the changes?

Under the illustrative pricing scheme we modelled, annual charges like car registration would be scrapped and replaced with a per kilometre charge of 15.5 cents.

Travel in Melbourne’s CBD area (inside a cordon – see Figure 1) during peak hours would be charged at an additional $1 per kilometre. Parking at train stations and park-and-ride facilities were also priced. Our modelling looked specifically at Melbourne, as that is where congestion is the biggest issue, but people in regional and rural Victoria could also benefit from some changes.

Flat rates for public transport would also be replaced with fares based on time, distance and mode.

It’s important to note that this model is an illustrative example, and the actual cost of travel could change if a scheme like this were to be implemented in Melbourne.

But the work we have done to develop this set of ideas and principles is based on economic modelling, best practice from other cities around the world who’ve successfully introduced pricing reform, and importantly, community views.

A broadly representative panel of community members told us that concessions and addressing locational disadvantage were crucial to a system like this being fair, and that service improvements would also be required to give people alternative transport options.

We modelled several measures to meet some of these concerns, including a $5 daily cap for concession holders and a discount for everyone else after the first $10 of charges.

All Victorians would also be entitled to 20 free travel days a year. Compared to the pricing model without these measures, this system would cost roughly $1.4 billion more per year – a significant amount, but far less than the projected cost of congestion rising to $10.2 billion per year by 2030.

And what could these changes mean for our transport network? They would remove up to 168,000 car trips from Victorian roads every day. 110,000 people would make the shift to buses, as they would be the cheapest form of  transport.

More than 40 per cent of drivers would cease driving into the Melbourne city cordon, causing average speeds during the morning peak to rise by 25 per cent.

And Victorians would spend eight per cent less time in peak hour congestion.

Transport network pricing around the world

We looked at where there have been major transport pricing reforms around the world, including London, Stockholm, Milan and Singapore, to see what we can learn.

The first key design feature was that all road and parking reforms that were adopted at scale were location-based and designed to mitigate congestion.

Another key feature was the use of cordons, or area charges. Charges applied to enter the designated area/s during peak times, but not during off-peak.

In London and Stockholm, additional public transport was introduced, at the same time as changes to pricing, to help provide greater choice for commuters.

And the impact is clear – in London, congestion has remained at similar levels over ten years, despite increases in population over that time.

In Milan, in the first year of new pricing, traffic decreased by 30 per cent and average speeds increased by about 12 per cent.

In Stockholm, traffic inside its city cordon decreased by about 20 per cent.

Whether our transport system can adapt to restrictions around social distancing and meet future demand remains to be seen.

But it is clear from our work that transport network pricing is the best solution to encourage Victorians to change their behaviour and make the best and safest use of our network.

Many office workers, particularly in the CBD, have already adapted to working from home in response to COVID-19.

So changing when and how they travel in response to transport network pricing, will be easier than before.

Providing these incentives through a change to how we pay will not only be easier, but essential, as people return to travelling when restrictions ease.

This will be critical to avoid even worse problems with safety, congestion and crowding on our transport network. 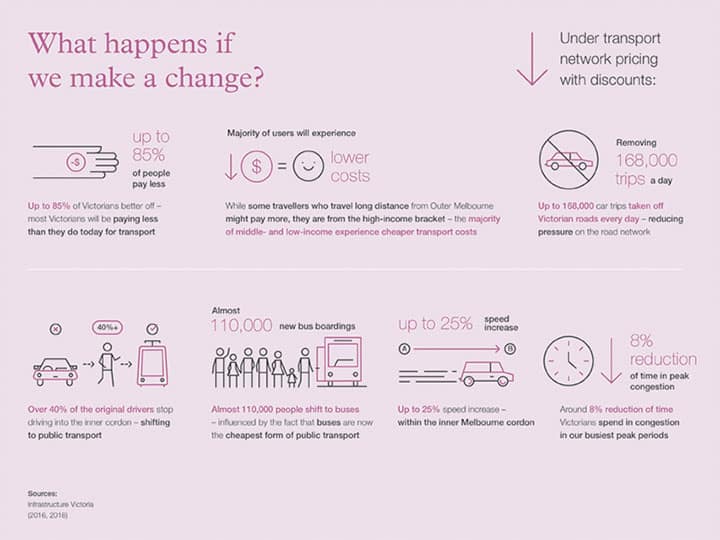